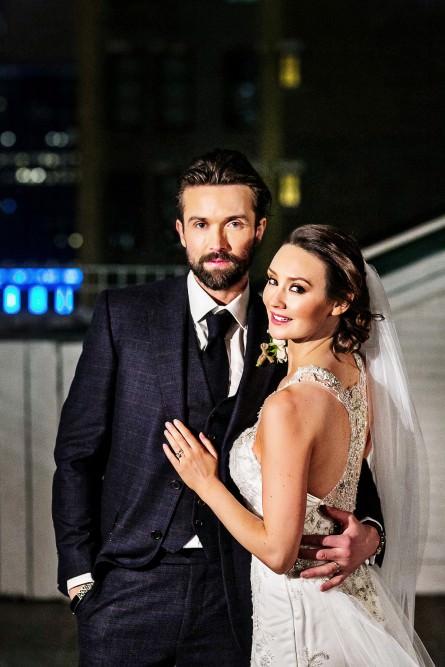 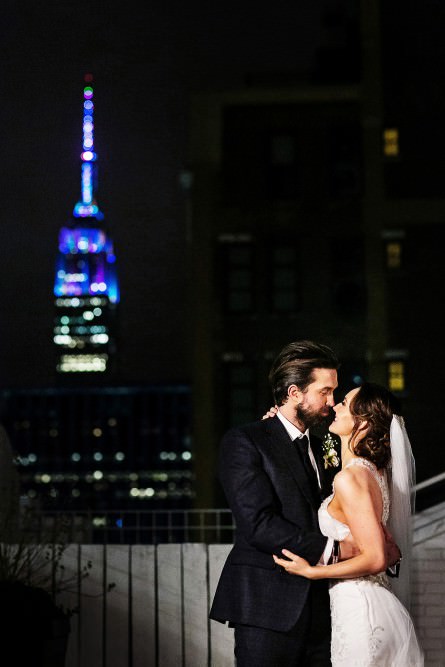 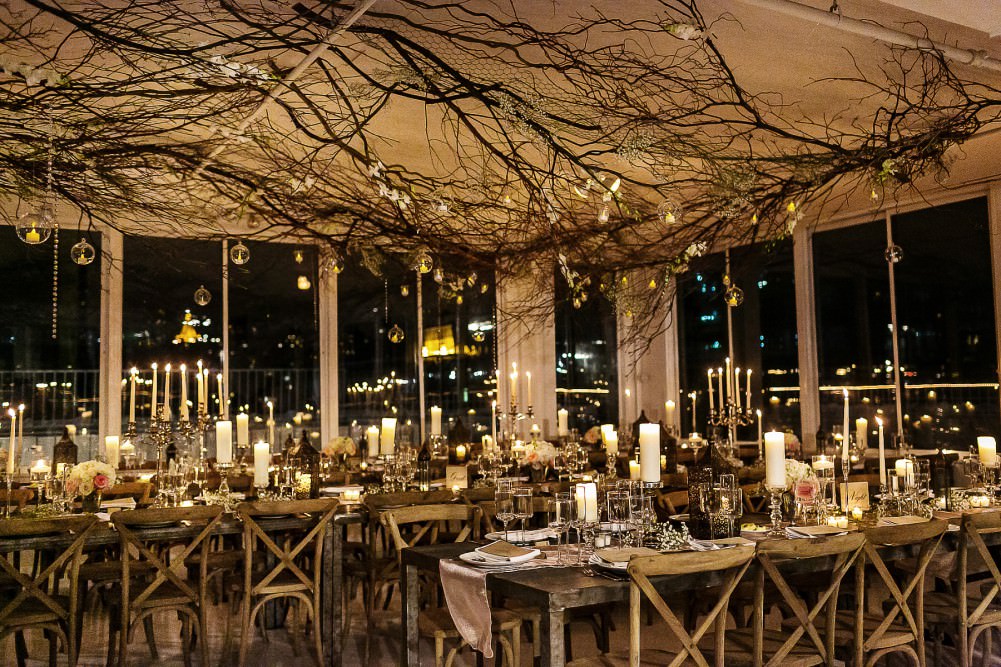 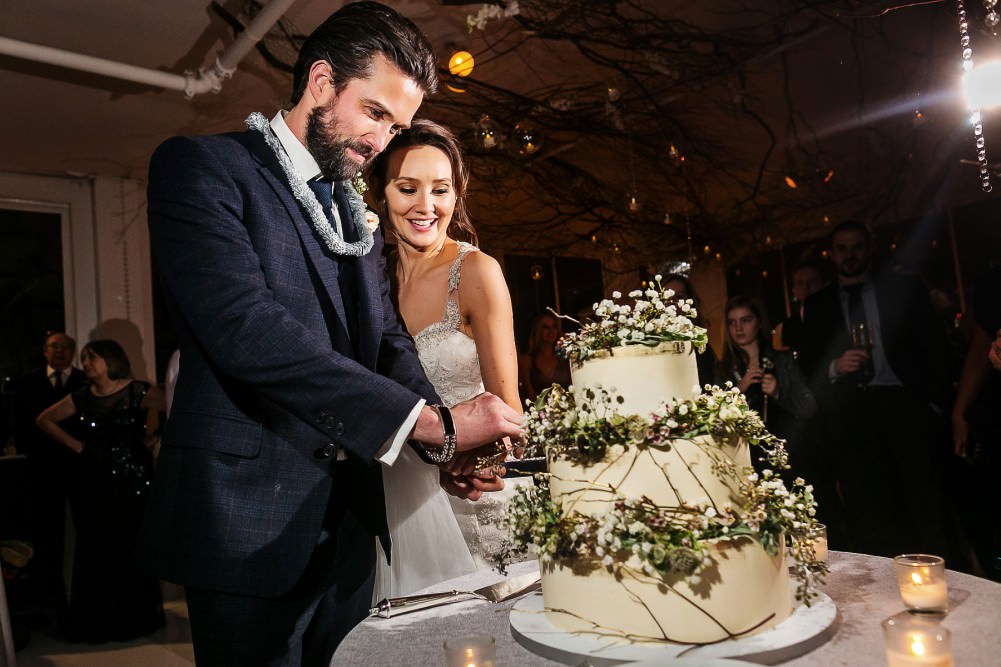 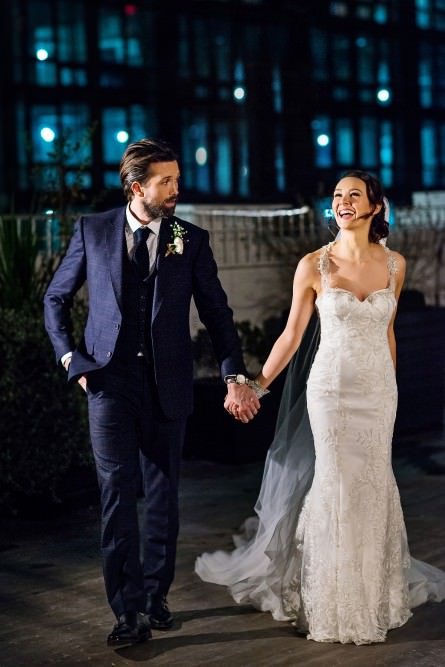 On New Years Eve, I had the honor to photograph Claire and Emmett's wedding at Studio 450 in New York City.  To respect their privacy, I've agreed to only post photos that appeared in the magazine.  The following is the interview from Hello! Magazine, interviewed by Dawn Emery:

Usually it’s the bride who makes the only grand entrance at a wedding, but groom Emmett Scanlan had other ideas. The actor, who played Glen Martin in The Fall, bobbed and weaved up the aisle to the Rocky soundtrack, wearing Irish tricolour boxing gloves and a robe.

The wedding planner gave the sonorous announcement: “Ladies and gentleman, the underdog of the relationship, for the last fight of his life… Mr Emmett J Scanlan!”

“I could hear the music from the next room,” says his bride, Claire Cooper, with a smile. “Everyone was screaming, clapping and laughing.”

The actor couple, who have been together for five years after meeting on the Hollyoaks set, married on New Year’s Eve in a two-storey venue that offered picture-perfect views of the New York skyline. Claire walked in on the arm of her father Barry with Trinah’s Let’s Stay Together playing. She was accompanied by maid of honour Amy Garcia and her bridesmaids, Emmett’s sister Orlaith Nellen and his daughter Kayla, 13.

“Kayla was the only person who could have decided whether the night went ahead or not,” says Emmett. “She loves Claire.”

BIG APPLE OF HIS EYE

The actor, who can be seen in bigbudget ITV drama Beowulf this month, explains the choice of venue. “Since we started dating, Claire and I have taken turns bringing the other to somewhere we’ve never been before on New Year’s Eve, as it was always a notoriously bad night. Last year was Hong Kong and the year before Iceland. New York is my favourite city in the world.

“Claire chose how many guests and I chose the date and location. I went for New Year’s Eve so I wouldn’t forget the anniversary and New York City at night is one of the most beautiful sights. The Empire State Building faced us, lit up like a giant Christmas tree.”

Guests weren’t told the venue for the wedding and had to wait at the Renaissance New York Hotel 57 in Manhattan before being driven to the location, a former warehouse. “It was chic, rustic and a little bohemian,” says Claire, soon to be seen in Kay Mellor drama In the Club. “We wrote our own vows. Vows should be spoken from the heart.”

Emmett’s pledge included a reference to their meeting on Hollyoaks: “In 2009 I auditioned to play your boyfriend, but that role fell to someone else. Here I stand today your husband, the best job I will ever get. I love you baby.” Claire also made vows to Kayla. “I needed to honour her and offer my ultimate respect and gratitude.” “In a ceremony, I think everyone is waiting for the ‘you may now kiss the bride’ part so you can celebrate,” says Emmett. “But the whole thing was really quite beautiful.”

The couple exchanged rings that they had bought in the New York Tiffany store last February. The bride didn’t follow the “something old, something new” tradition, however. “Katy Sloane, Barry’s wife, gave me a wee beautiful blue crystal – that’s the closest to tradition I got,” she says. “I’m more tuned into spiritual empowering beliefs.”

There were more surprises in store, as Claire and Emmett had booked The Late Show’s Gospel Choir to secretly sit among the 63 guests. The choir burst into Oh Happy Day at the end of the ceremony. “They had such soul and power – it was one of my favourite parts of the evening,” says Emmett.

“Everyone was clapping and singing along,” says Claire. “There was so much love in the room.” The choir continued while Claire and Emmett went to have photographs taken. “They brought the song to another level,” says Claire. “The whole place vibrated.” “When planning the whole event we’d come up with a ‘wouldn’t it be nice if…’ idea, followed by a ‘why the f**k not?’,” says Emmett. “Traditional it certainly wasn’t.”

After the ceremony, a door slid open to reveal a room decorated with candles and black-and-white photos of the couple and their friends, attached to ribbons hanging from the ceiling. Guests drifted in to sip cocktails named Ball and Chain, First Kiss and Neverland. After cocktail hour, a violinist led the guests onto the top level of the penthouse, where they enjoyed a meatfree three-course meal – Claire and Emmett became vegetarians last year – accompanied by a string quartet.

There were speeches by both of the couple’s fathers, by Eoin, by maid of honour Amy and by Orlaith. Rory also read a speech written by Emmett’s mother Denise, sadly too ill to attend. “That broke Emmett’s heart,” says Claire. One of the biggest surprises of the night was when Kayla stood up to speak.

“She’s an angel, but shy,” says Emmett. “So for her to do that took a lot of guts. When she finished, I was in bits. Her speech was so honest and pure – it stole the night.” “Thank goodness for waterproof mascara,” adds Claire. “Kayla’s speech was simply beautiful. “She is our endless stream of love and wisdom. We all need a child’s wisdom: it makes everything simplified and beautiful.”

The evening kicked back into party mode after the speeches, as the New York Swing band took to the stage. “They were a highlight,” says Emmett. The bride and groom’s first dance was to Happy by Pharrell Williams, with the band setting a slow pace. “But then, when it got to the chorus, I grabbed a few of my friends and gave a nod to the band and they went into the original tempo of the song,” says Emmett. “One second we were having a romantic dance and the next we were cocooned by walls of smiling, laughing, screaming faces.”

“People were breakdancing and throwing some serious shapes,” says Claire.

AUDITIONING FOR THE ROLE

Many of their friends have known the couple since they met. Claire played Jacqui McQueen on Hollyoaks from 2006 to 2013; Emmett played bad boy Brendan Brady from 2010 to 2013.

As his vows hinted, Emmett initially auditioned to play Jacqui’s boyfriend. “I thought, ‘Wow, this guy is phenomenal and that’s who I want to work with,’” says Claire. “I asked for him twice, but it didn’t happen. Then the divine role came 18 months later and Brendan was born.”

The attraction was instant. “Initially I steered clear – he was attractive, talented and peacocking around,” says Claire. “I would talk myself out of being attracted to him and would avoid conversations – all the things that scream, ‘I fancy you.’ Luckily I could hide behind Jacqui’s largerthan-life persona.”

“The sexiest thing about Claire was her talent,” says Emmett. “She was the best actor on ’Oaks. Her eyes tell stories and I can read them like a book. But ultimately her heart… If she didn’t have a good one, I’d have left a long time ago.

“We loved our time in Hollyoaks. Most importantly it’s where we met and you can’t put a price on that… Well, you can: she’s expensive.”

Emmett proposed on Christmas Eve 2014 in front of his daughter and family. “We have a tradition that we open presents on Christmas Eve – I think I started that because of my impatience. Claire and I had said we wouldn’t get each other anything as we were heading to Borneo in a few days and I hadn’t got her a birthday present that year either – she was fine with that. The truth was I had spent all my money on a ring.

“After we’d opened the presents I turned to Claire and said, ‘You don’t think I wasn’t going to get you something?’ and I got down on one knee and asked, ‘Would you like to be Claire Scanlan?’ She cried. I’m still not sure she answered the question, now that I think about it. I know she wanted to get married,” Emmett says. “But commitment is a big phobia of mine – at least it was. I love being a dad; I can do that. After Kayla I’d have more kids in a heartbeat. But I was never good at relationships. “In the past year I’d started looking at Claire differently. She was watching TV one evening and, as she sat transfixed, it was a nothing moment, but I thought, ‘How am I gonna find another hot girl with such low standards?’ “I’m kidding. I thought, ‘I love this woman, I want to make her happy and she makes me happy.’ That was that.”

The couple have plenty to look forward to, including Emmett’s appearance in the film Breakdown, about a contract killer. They both appeared in last year’s NBC drama A.D. The Bible Continues and will be moving temporarily to Los Angeles this month to pursue acting projects.

“It’s hard because I have a daughter here and she means the world to me,” says Emmett. “But there are a few things we are up for. They may materialise into something or nothing, but one thing’s for sure: if we stay [in the UK] and don’t give it a go, it will be nothing. Life is all about risks.”

Due to their work commitments, the newlyweds don’t have time to take a honeymoon just yet, but spent their first night as a married couple in a suite at the Trump hotel. Emmett says they “felt married the first time they met” but it felt special to make their commitment in front of loved ones. “I’ve now got an extra bit of weight on my left hand: the world’s smallest handcuff,” he jokes.